Sopapilla Cheesecake Recipe is a very simple and delicious made with a thick layer of cheesecake, in between the crescent dough and topped with a cinnamon mixture.

Cheesecake recipes are very popular on the blog, being that cheesecake is my favorite dessert. You should also try these Pumpkin Cheesecake Bars, and the Cheesecake Factory Original Cheesecake copycat recipe.

If I would have to choose a dessert to eat for the rest of my life, I would have a hard time choosing between cheesecake and ice cream. I probably make cheesecake every week, and I love the creamy texture and sweet taste, it’s just the perfect combo for me. This Sopapilla Cheesecake is a new favorite around here. A creamy layer of cheesecake is baked between crescent dough that has been topped with a melted butter cinnamon sugar mixture!

This recipe is so simple and easy, that everyone can make it. You don’t have to worry about cracks or other “cheesecake issues”! If you love, sopapillas, or snickerdoodles, or anything with cinnamon, this recipe is a must-try!

Usually, this Mexican Cheesecake is made with 2 packages of cream cheese, which you can do as well, but since I am a cheesecake fanatic, I firmly believe that more is better. I used 4 cream cheese packages, for a thick and creamy cheesecake layer.

I mean, this combo is the bomb, a sweet and cinnamony cheesecake layer, baked between pillowy crescent dough! The best part? A cinnamon brown sugar butter mixture is poured on top, so every bite you take is filled with a cinnamon flavor that is hard to resist and will remind you of Sopapillas.

A sopapilla is a crispy, deep-fried pastry, rolled in cinnamon and sugar, that is very common in Hispanic cuisine, especially in Mexico. It is often served covered with honey or syrup.

What do you need to make Sapopilla Cheesecake?

Adding flour or cornstarch to a cheesecake:

I also like that the addition improves the texture of the cheesecake, making it a bit firmer. I personally dislike the cheesecakes are so creamy, that they melt, or don’t hold their shape well. You can add flour or cornstarch to this recipe or skip it, it’s up to you.

Looking for more Cheesecake Recipes? Check these out: 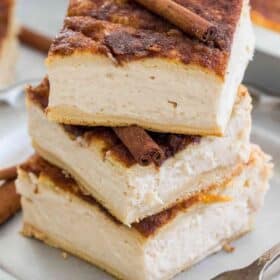 I’ve seen this recipe without the use of an egg. What does the egg do to the mixture? Trying to decide which way to go...

The filling is fluffier, I prefer it this way.

Is there a difference with using a dark non-stick pan vs glass?

may be a few minutes in baking time, but other than that no.

This is so simple and the taste is to die for!

Super easy to make and delicious :) thank you so much I’m addicted

This looks delicious! Can I make a week ahead for a party and just keep it refrigerated?

No, the top layer won't look as good, make it 2 days ahead of time.

My favorite version of this dessert by far!

Made this with the two packs of cream cheese for a get together last night. It was a major hit and is THE BEST sopapillia cheesecake I’ve ever had. I did 1/4 cup of flour for thickening and would recommend it.