We love making Instant Pot recipes because it’s convenient and usually done at a fraction of time. Like the Taco Soup and Baked Potato Soup, this French Onion Soup will quickly become your go-to soup.

This delicious homemade Instant Pot French Onion Soup is best to be served right away. Add some cheese on top, and use a fresh baguette for dipping. Also, it’s best to use cheeses that have some sharpness to them such as Gruyère or aged Beemster. 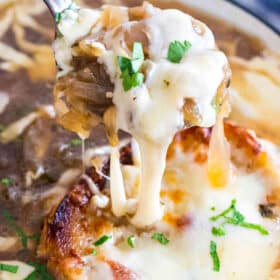 Third time making this and I always forget to add more onions. They cook down pretty good so if you you like it oniony you should add a few more onions. Having said that this is a great great recipe. The hardest thing is slicing the onions but I used a mandolin quick and not to many tears 😀👍

I love soup but my husband does not, French onion he will tolerate. I made this soup for him for dinner last night and he had 3 bowls! Perfect for a chilly evening. We will make it again, the only improvement we could have made is using yellow onions not sweet onions, it does have a pretty sweet flavor. Better than Bouillon beef base worked perfectly well too. Thanks!

happy that you loved the recipe, thanks for the feedback!

It’s a keeper for meCathy

I really loved this soup. It’s a keeper for me