Egg Foo Young is a delectable Chinese-inspired dish made with eggs, vegetables, and sometimes meat paired with a sauce. Make a homemade version with this easy recipe!

If you are craving for some Chinese dishes, then, this recipe is perfect for you! Try this with our other easy oriental recipes like the Szechuan Chicken, Sweet and Sour Pork, and Moo Goo Gai Pan! 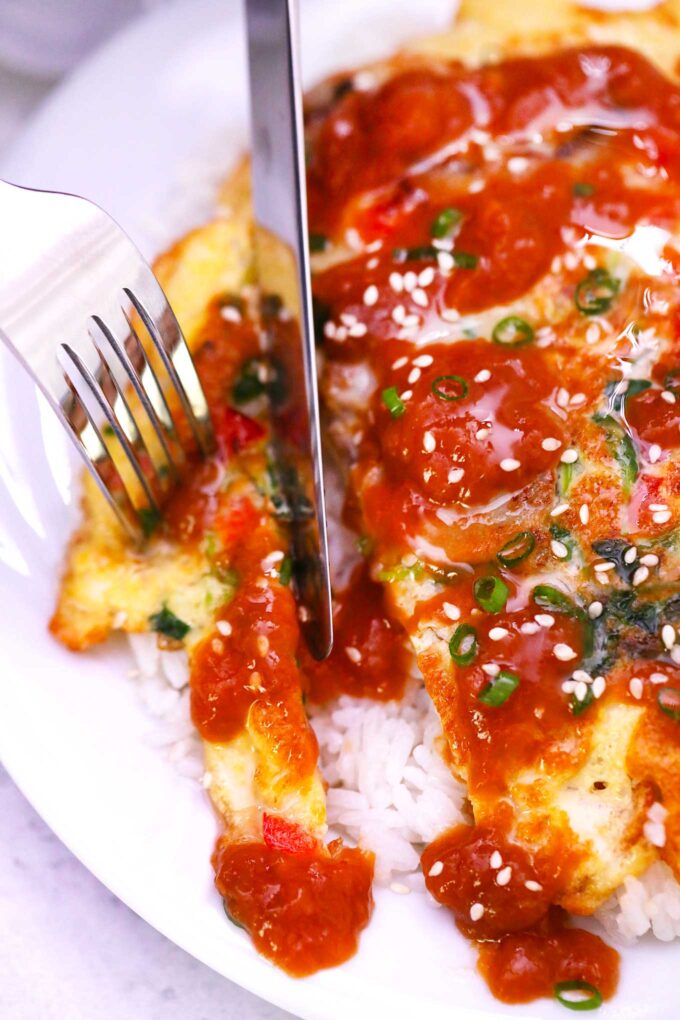 Egg Foo Young is perfect for a quick weeknight dinner or filling breakfast! It is just an omelet made the Chinese way – with the addition of soy sauce, oyster sauce, rice vinegar, and sesame oil. With these flavors, expect nothing but a savory ensemble!

It may be a popular Chinese takeout, but you can make it at home! This recipe is a great way to utilize those leftover veggies and meat you still have in the fridge.

You will be able to control the ingredients and save money at the same time. Hence, not only will you be able to cook a hearty dinner, but you will also minimize your food wastage.

What is egg foo young?

It is made with beaten egg filled with vegetables and often meat, and then, fried in an oiled pan. Pretty much like the French omelet that we are familiar with. But this dish has a gravy that the French omelet does not have.

It is one of the healthiest Chinese-inspired dishes out there as it has fiber from the vegetables and protein from the egg. The calories range from about 300 to 450, depending on what you filled it with.

The downfall is the high sodium content of the gravy and so, you may opt for the low-sodium soy sauce to lessen this impact.

Also, since this dish is fried, limit the oil that you will use – just enough so that the mixture will not stick to the pan. 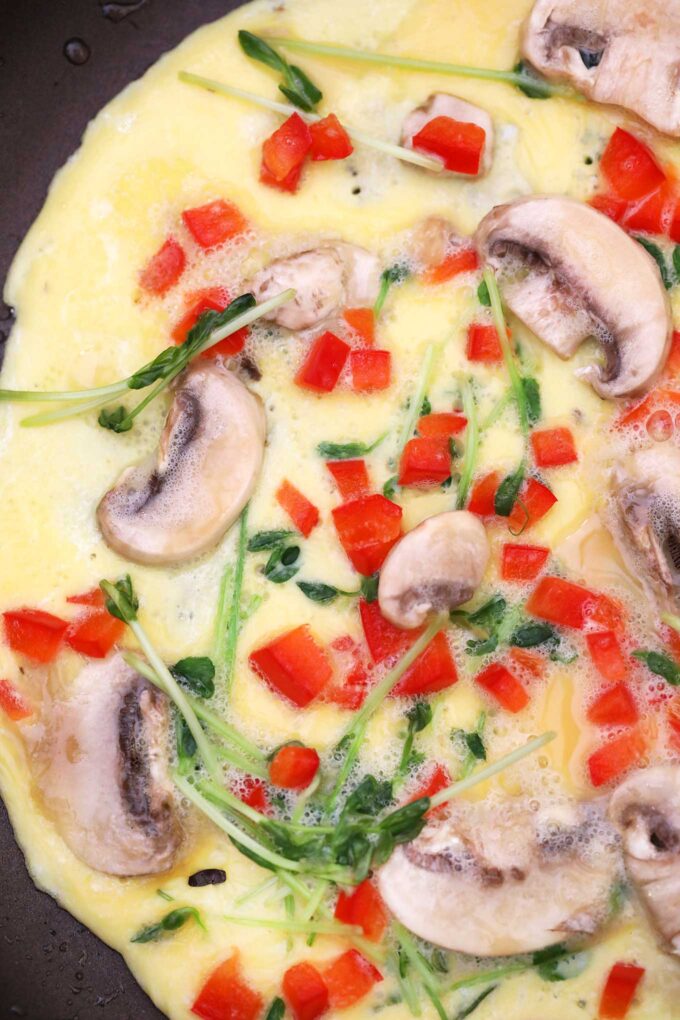 What is egg foo young gravy made of?

The Chinese flavors in this dish are in its gravy. In this recipe, we prepare the gravy with the following ingredients:

How to make egg foo young:

You can tweak the recipe by adding the following suggested ingredients:

For the vegetables, thin slices of carrots or strips of cabbage (or other greens) can be added raw. But the rest of the vegetables may require pre-cooking to soften them up like the eggplant and peppers.

For the meat, cook it first as it requires a longer cooking time than the egg. We like using shrimp, chicken or pork bites. 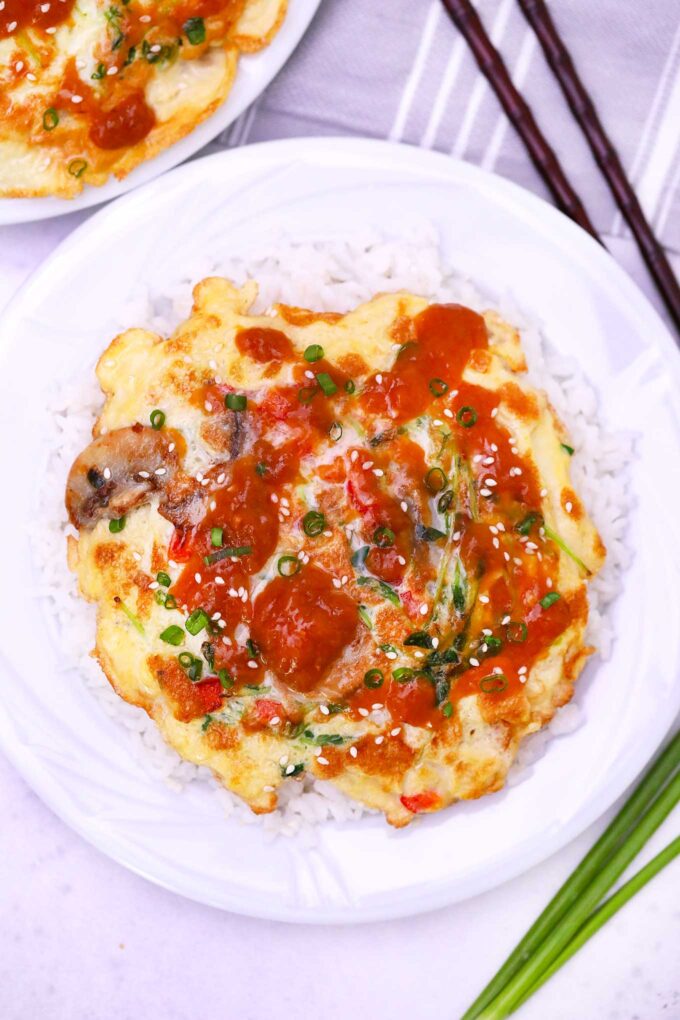 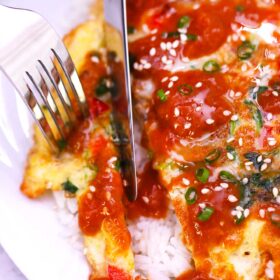 How to Cook Bacon in the Oven [Video]

I get egg foo young every time we order takeout. I can't wait to try making it for myself.

That looks really good. You know, Asian food is something I've never thought of making for myself before. That egg foo young looks like a great place to start.

This is so cool! I think we'd really enjoy this as a family dinner. It might be nice to try a few different veggie combinations.

I have never actually had this before. I don't know why because this looks amazing. I have got to give it a try.

I always have seen this on the local Chinese food menu and had no idea what it was. Thank you for letting me know what it was. This recipe sounds good!

I haven't had the pleasure of trying egg foo young before. I would definitely go the lower sodium route. I wonder if my family will like it?

My husband has made egg foo young for me before, so good! I'd love to try your version.

We eat egg foo young every time we go out for Chinese. It's so delicious with the white rice. I never thought of preparing it at home. I will now!

It sounds like a great recipe! I've never had that! Saved it for when the weather gets a bit cooler! Thanks for sharing it!

I have never had egg foo young. I didn't even know what it was, but it does sound quite tasty.

Wow, this looks super good. Can't wait to cook this for the family.

This looks so delicious! I am obsessed with making Asian food at home for my family. Adding this recipe to my rotation.

This is something that I want to have during breakfast. It is super easy to make and prepare specially if you are always in a hurry. Perfect for people who's on the go.