Instant Pot Chicken Alfredo is a classic favorite! Make this creamy dish at home using the trusty Instant Pot for a quick meal with minimal cleanup! Watch the recipe video tutorial below and see how easy this dish is!

This is just one of the many recipes that we can make using the IP! For more recipes, you can read on my posts like Pumpkin Soup, Mongolian Beef, and Refried Beans.

Instant Pot Chicken Alfredo is a simple dish that you can whip up in minutes. Each noodle is perfectly coated with the creamy sauce which makes it so satisfying and comforting.

Did you know that this Italian dish is popularly called Alfredo in the US but not in Italy? If you will go to Italy and ask for it, simply say fettuccine al burro.

Alfredo di Lelio popularized the dish in the early 1910s. Initially, it was only a part of their menu rotation at home, but when he included it in his restaurant, it became popular with American actors who came to dine.

Eventually, some actors brought his recipe to the US and to honor him, it was called Alfredo. Originally, it is only pasta in butter and parmesan. But the modern versions now involve meat, just like in this recipe wherein we cook it with chicken.

It has a rich history because people love it that much, don’t you think? So, if you are craving for it, you can easily make it with this easy recipe at home – just like where it all started.

What pasta is best to use for Instant Pot Chicken Alfredo?

Fettuccine is the traditional one to use, but this is so versatile that spaghetti, linguine, or even penne can be used in this recipe. Just choose anything that you have, and it does not matter that much as long as you use the dry uncooked ones.

How to make homemade Alfredo Sauce?

Check out my recipe for the Alfredo sauce on the site. Use it on noodles, casseroles, or even pizza.

Can I make it in advance?

You can opt to cook the chicken beforehand to shorten the process. Or, you can follow the storage instructions so you first store it then, reheat and serve later. 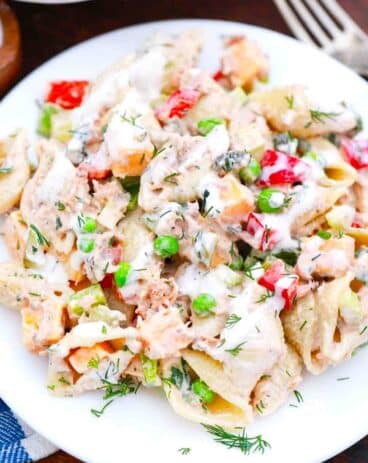 Thank you for the recipe! My family loved it!

I want shrimp alfredo tonight! I love how easy this is in the Instant Pot.

That creamy deliciousness is exactly what I need for a busy weeknight!

The Alfredo sauce has such an interesting history! This is so comforting and easy to make!

This is the perfect weeknight dinner! So easy and delicious!