This Vegan Carrot Halwa Trifle is a take on the classic Indian Carrot Halwa or otherwise called Gajar Ka Halwa. Vegan carrot halwa is a sweet dessert that has the consistency of a pudding and according to Wikipedia its very popular in India and Pakistan. I obviously added my own twist to this delicious dessert and made it a trifle.

I love carrot souffle, and I love carrot cake, and for the record, I like raw carrots, so I knew that incorporating vegan carrot halwa into my dessert concoction will be a winner. As you can see, I was influenced here by Indian, Pakistani and Turkish cuisine. After I decided to use cardamom spiced vegan carrot halwa as the main star of my dessert, I knew I wanted to make a trifle.

The vegan carrot halwa was made with coconut oil and creamy vanilla coconut yogurt. It has a very smooth, soft texture, almost like eating a carrot souffle. It feels rich, while its still on the healthy side of the spectrum. I added some sugar, that is where I made my compromise, but you can totally go for a sugar substitute if you want a sugar-free version. The vegan carrot halwa is spiced with a little cardamom, to add that aroma that is so traditional for this Indian dessert. 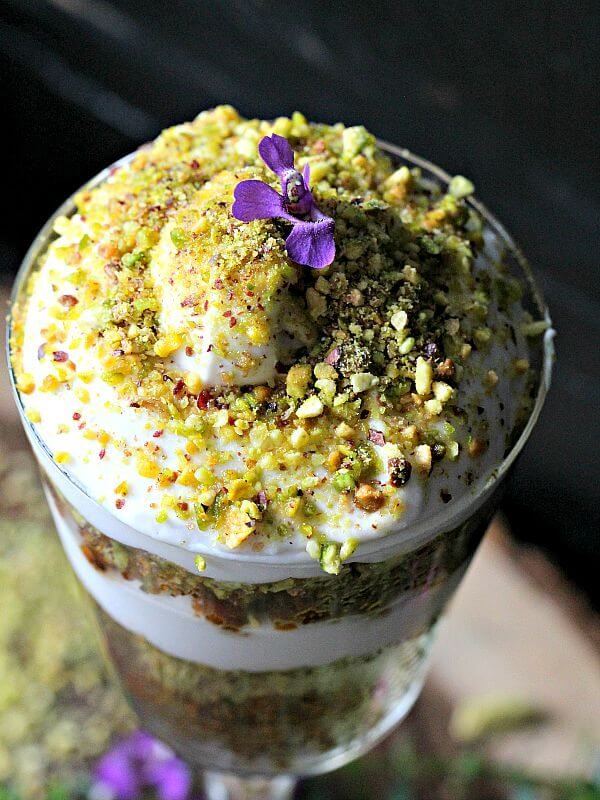 What is a Trifle desert?

Trifle in English cuisine is a dessert made with fruit, an a layer of finger or brownies and custard. It can be topped with whipped cream.

How long does the Trifle take to set?

Once you cover the lady finger with cream, cover the dish with cling film and leave to set in the fridge for about two hours. It is best for trifle to settle for few hours so it absorbs the cream and becomes moister.

Can you store the Trifle?

Leftover trifle can be stored, loosely covered in the fridge, for up to 3 days, after which it will still be edible but the cake will be very soggy and the cream will become looser, soaking up the cream and syrup. Best to eat the trifle within 2-3 days.

Can you freeze the Trifle?

Freezing the trifle is not recommended, as the cream wouldn’t freeze well, and upon defrosting it will become watery.

What a beautiful dish! I would love to try it!! Your photography is absolutely stunning!!

Sandra @ A Dash of Sanity

Pistachios is definitely a favorite of mine for recipes, so this sure sounds amazing to me!

Your photos are super gorgeous, makes me want to reach out and grab one !

That's awesome dessert. Mam please tell me coconut curd where I stay there it is not available. Substitute of it

Question: How tall are the glasses you recommend for this recipe? I'm eager to make it, but I'm planning to prepare it for 12 people and need to know how many cans of coconut milk I need and the size of the glasses I should be using. It looks truly decadent!